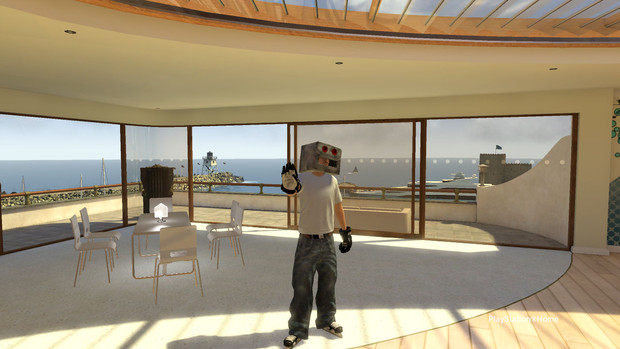 Alright so I think that is enough for now. What originally started off as me just wasting time in Home has turned into something I can blog about. Yes there will be more of these posts. I have 5 more spaces captured but felt that they deserve more space than I can give them here. Just think, you can see how Home is evolving without ever having to log on. It's a win-win situation! Of course the point of this blog is to do the opposite and see if anything in Home will interest you. Re-installing stuff is a hassle.

Home has been a bit of an enigma for Sony. What they intended to release turned out to be something that was uninteresting and not something their fans wanted. It took itself too seriously. Slowly though it is turning into a respectable product. Universal game launching is a good start but it still needs that much coveted "party system" to take full advantage of it. The styles seen in Home have changed from trying to be super-realistic to off-the-walls-crazy. Alright, it may not be the traditional "Japanese-crazy" yet but it is heading down that road. It is something that needed to happen. Video games are meant to be an escape from the real world, not a poor imitation of it. The biggest and best change may be the direction Home is taking. It was primarily intended to be a networking system, a virtual Facebook or Myspace. Focusing more on gaming has made Home more appealing to the average gamer. As you will see in my next post, game spaces are now doing a better job of bringing in like minded gamers and selling them on their product. It is becoming an extension of the game itself. There are still tons of things that need to change before Home becomes a destination for most everyday gamers but the groundwork is laid and it is heading in the right direction.

After another weekend gone, it's back to the grind of the real world.
#Community    #PS3
Login to vote this up!