My Setup and Game Collection [UPDATED]

This is the main set up in the living room. Here you can see our PS3, Xbox 360 Elite, Wii as well as games for all three systems.

[UPDATE]: I decided not to be such a lazy bum and I unpacked my SNES, Genesis and N64 collections. I also got my Handhelds out for a picture. Scroll to the very bottom to check out the 4 new pics!

I posted my original setup blog for the Turning Point gaming rig contest but that was well over a year ago. Since then I've moved into a new apartment with my girlfriend and our collections have merged, forming one giant uber collection. I've also moved into the HD world in a big way, as we own 2 Sharp Aquos TVs. This post is going to long, I took 20+ pictures, so go get yourself a drink, go to the bathroom, do what you have to do to get comfortable and enjoy.

This is a close up shot of the consoles. For those that are curious, the PS3 is 60 gig and fully backwards compatible, the 360 Elite red ringed once but we turned it off and right back on and it's been fine ever since and we absolutely love our Wii.

Here are our PS3 and Wii collections, as well as a few PS2 games I've been playing on the PS3. The PS3 games here are: Army of Two, Devil May Cry 4, Ghostbusters, Heavenly Sword, Lego Indian Jones, Killzone 2, Little Big Planet, Motor Storm, Motor Storm: Pacific Rift, Sonic the Hedgehog (funny story about that one, we actually found the disc for Sonic inside the PS3 when we bought it used. Not wanting a game to go to waste, even a crappy one, I payed $3 for a case and manual for it on Ebay, making it a part of our collection, still haven't played it yet.) and Valkyria Chronicles.

The BluRays in the shot are The Wrestler, Transporter 1 and 2, Donnie Darko and Sin City.

This is our accessories area, to the left of the TV. You can see my 360 steering wheel, my TE arcade stick in the Evo Stick Sack and my girlfriends TE Arcade Stick still in the box (she bought it right before going to visit her mother in Florida and hasn't had a chance to use it yet. She comes home this Thursday though and she can't wait to "take me for a ride" if you know what I mean. Yes that was sexual innuendo wrapped up in a MVC2 reference).

If any of you musicians out there were wondering what was in that case in the last shot, it's my girlfriend's Fender Stratacoustic. She's a beaut!

To the left of the accessories area, we have this bitichin Ikea bookshelf. On top you can see the box for my TE Arcade Stick as well as the three Family Guy stuffed toys we won at our local (1 hour away) arcade. I love me some skee ball. Also a random inflatable Pink Flamingo. I'm not even sure where my girlfriend got that.

Now I'm gonna post a bunch of closeups of the various shelves. First up we have the shelf with my Halo 3 helmet, the "action figures" from the RE5 and SF4 collectors edition, my Big Daddy statue, a Boba Fett bobble head, my Vault Boy bobble head and my Viewtiful Joe action figures.

This is my girl's collection of SNES boxes from when she was a kid. I'm extremely jealous of them because exactly zero of my SNES boxes survived my childhood when most of hers are in excellent shape.

Just some random stuff, note the NES controller wallet in the back. I use it sometimes when my regular wallet and chain would be inappropriate for whatever reason.

This is the beginning of our lunch box collection as well as another part of her Potato Head collection.

Even more lunch boxes and GASP! Books on a bookshelf!

This is a drawer with all our old vidya accessories. I know most of you probably have a drawer just like this at home.

In this close up shot you can see the other Genesis, a couple SNESs, my Dreamcast, my N64, my NES, my Gamecube, my Xbox, my Slim PS2 and my broken Phat PS2.

This is my utterly pathetic Dreamcast collection: Worms Armageddon, Virtual-On: Oratorio Tangram, Jet Grid Radio, Crazy Taxi, Shenmue and Quake 3. I had Soul Calibur and Sonic Adventure but I sold them because for some reason my DC refuses to play any copy of either game. It's the damndest thing.

This is where I normally keep my SNES games but to my surprise I only found a couple of Game Boy Advances. That was random. It turns out my SNES games are still boxed up along with some of my PSone games and my Genesis games.

This is my bookcase in the office, it needs reorganizing badly.[/i] 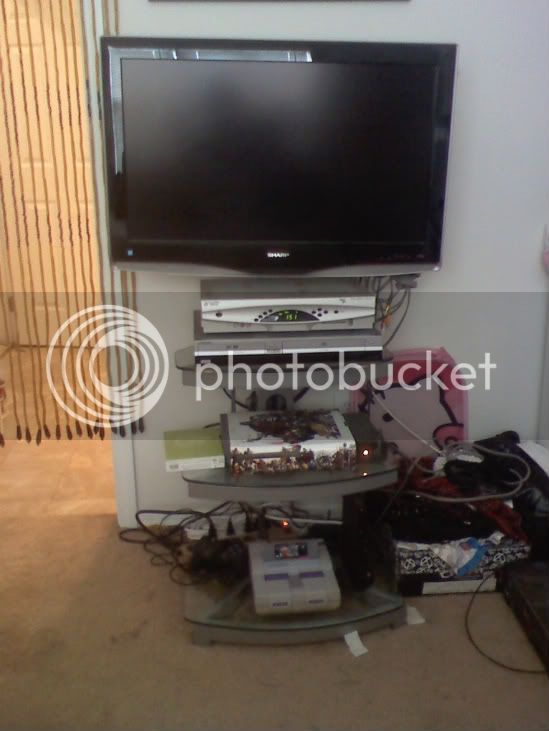 This is our bedroom setup. We have here my 360 Pro (with badass SFIV skin), my girl's PS2 slim and her SNES. Soon to be added will be a PS3 Slim.

Close up shot of the bedroom consoles. For those interested, my 360 has never Red Ringed.

These are the games we keep upstairs, they are mostly duplicates of the 360 games downstairs, but there are a couple we have up here that aren't downstairs, they are Kameo and Ghost Recon Advanced War Fighter. Also pictured is my girlfriends (admittedly weak) PS2 collection as well as her copy of FFVIII (the only FF she enjoys, can you believe that shit? Oh well, nobodies perfect).

Here are our N64 games. Most of these are hers. The majority of my collection is packed away pretty deep. In this picture you can see Pokemon Snap, Army Men: Sarges Heroes, my copy of Super Mario 64, my copy of Star War: Shadows of the Empire, Mario Kart 64, Mario Party, Bomberman 64, Goldeneye, her copy of Super Mario 64, WCW/NWO revenge, Yoshi's Story, WCW Mayhem, WWF War Zone and WWF Wrestlemania 2000. Notable games not featured include Jet Force Gemini, Zelda Ocarina of Time and Wave Race 64.

Here are a few of my Genesis games, a few more are packed away, probably with the rest of the N64 and Playstation games. Besides Flashback I don't own much of anything interesting.

These are my handhelds. Pictured here is my Gameboy Pocket, Gameboy Color, two Gameboy Advances, my neo-geo pocket color, my DS Phat, my Black DSi and my black PSP. The red Kratos PSP and the blue DSi are hers. Not pictured are our two game gears, which I cannot find. I also care not to find all the loose cartridges for all these systems, I have a bunch in a messenger bag in the office but there are a bunch more in random spots all over the apartment. Rest assured I have most of what you'd expect for each system.

And last but not least we have the SNES games. I unpacked them and put them away in their home, as you can see. I'm not going to list them all, as I have 40+ games in there. I will say that I have the Street Fighter ports, all three Mortal Kombats, Killer Instinct, the clayfighter games, Super Mario World, Super Mario All-Stars, two copies of Uniracers, two copies of Star Fox, Donkey Kong Country 1-3, The Legend of Zelda a Link to the Past and the crown jewel of my game collection, Final Fantasy VI, featured prominently in this picture.

Also in this picture, if you care to notice, is the original Paper Mario, sitting in my N64.

So there you have it. This blog contains approximately 95% of our gaming collection. Not pictured are all my various plastic musical instruments, my Steel Battalion controller and a few of my 360 games that I lent out to my brother. I hope you learned something about me (probably something to do with my girlfriend's Hello Kitty obsession) and if not, well I hope I was at least entertaining. Thanks for reading.
#Community
Login to vote this up!