5:33 AM on 07.11.2009 (server time)    0
Multiplayer gaming has recently become a big stable in what makes games 'good' or 'bad' in the general publics view; for some games, it's a good thing, for others, it's a bad. You still get games that are exclusively single player, so it's only common that you would get games that are strictly multiplayer.

When you take a franchise like Battlefield, and want to add to it, you have a huge fan-base to deliver to, and they aren't the people you want to cross; which thankfully DiCE doesn't have to worry about. With their most recent multiplayer exclusive title, Battlefield 1943, they deliver a great package that really stands on it's own two legs. Well, when you can get into a game anyway. 1943 has very little to it, and seems to like the number 'three' a lot. There are 3 maps, 3 classes, and 3 different vehicles. However, if you think that having that little an amount of things is going to impair the experience, you're deeply mistaken. The FrostBite engine, which was also used for Battlefield: Bad Company, is back and we see the improvements they made for Bad Company 2 in this title. Buildings are tougher to destroy, but most of them can be fully decimated now. Really, if it has four walls and a ceiling, you can destroy it. (If anyone points out the Lighthouse on Iwo Jima, in my defense that has one wall.)

Honestly, gameplay is incredibly smooth. You can choose to fight as a riflemen, infantry, or sniper unit. Riflemen for mid-long range, infantry for CQC, and sniper for (obviously) LOOOONG range combat. Except, it doesn't really work how its intended. Over my massive amounts of play time since release, 90% of the time I've played riflemen, simply because its.. the most efficient. With an M1 Garand, you really can't go wrong. The accuracy is deadly, the recoil is easily swooned to the side, and the whole one-shot-at-a-time dealio with it actually works quite well for once. With a 3 bullet kill-range for it, I'm okay with that. The infantry units carry SMG's, which don't really do much. The reload time on them is a bit on the long side, and the fact of the matter is: they're just too damn inaccurate. You can literally put an entire clip into someone and have them not die. Of course, sometimes 3 bullets kills them, sometimes 20 doesn't. It's just a bugger to deal with and infantry just isnt useful for a whole lot of situations. The ones it IS useful for though, it works excellently. Besides, who plays Battlefield for the gunplay?

Plain and simple: the 3 vehicles fit the game excellently, and are freakin' awesome. All of them. You can choose to drive a jeep through your mortar-shot-pit filled field of death, you could also decide to blow some infantry to hell with a tank. Or you could take the high-road (quite literally) with a plane. Oh, and did I mention the planes have bombs you can drop? Yeah, it's awesome. The greatest thing about the vehicles though is, the classes are balanced with them perfectly. It doesn't matter if you're a sniper and you have a tank tailing you, or a riflemen with a plane trying to bomb you. You can destroy them very easily. Every class has a type of explosives meant for dealing out damage to vehicles; riflemen have grenade-launchers on their rifles, snipers carry around blocks of c4 that can be detonated whenever they feel like it, and infantry have rocket launchers. However, it should be noted that rocket launchers and grenade-launchers both have pitch affects on them (IE: over distance they curve towards the ground), so you need to actually think before shooting the things off. If you feel that the enemy has too much control of the sky though, feel free to jump on an anti-air gun. There are PLENTY of them across the maps, so really planes can be kept in check by units on the ground, and in the sky.

There're a couple of things I've noticed when playing though, that really stood out to me on a large scale; spawn areas, and air-strikes. On 2 of the 3 maps, both teams start off on a giant-ass battleship (AWESOME!) which have planes (AWESOME!) and infantry-boats (AWESOME!) on them. The boats have a whopping 6 seats per boat, and with 4 of them you can get quite the ground game on the maps. Your teams will move into an island (no inland maps, all are islands surrounded by ocean. Yes, awesome again) and capture all the points there (via Conquest, the classic BF gametype) and have to hold control of them. However, while on these battleships; you earn no points. Meaning, if you've got a pesky enemy plane dropping bombs on you while you spawn, he won't get any points for it. Which means, he won't try it again. However, this works both ways. You don't get points for killing enemies while in your spawn either, (sorry, snipers) so the game does encourage you to get inland and take the fight to the enemy. The other thing I've noticed, the air-strikes, is awesome. Basically, Each island has one base that both teams will constantly fight for, because of one reason; it has the air-raid room. It's a small little indestructible building that you can use to call in 3 fighter-pilots that will drop bombs anywhere on the map; the catch is, planes can shoot down the bombers (not difficult in the slightest, surprisingly), A.A. guns affect them, and infantry can take them down as well (if they have the accuracy). Another thing is, you really have to think about it, because there's a two minute spawn cycle on it, which results in people 'camping' the area.

Battlefield 1943 is a game that you can't play by yourself. It begs to be played with a team effort; I can't tell you how many games me and a single other buddy have been able to turn around, just by working together. It's such a blast playing with friends, and you can really have some amazing fun with it. With a 4th air-only map coming whenever the system community of your choice gets 43 million kills, you can be sure there's more fun to be had then what's already here: which is a hell of a lot. This game out-shines every other XBLA/PSN game I can think of, and for $15, it's a steal. If you like FPS, if you like Battlefield, if you even like games that require you to think in a manner where you look at the big picture instead of the small one, you owe it to yourself to buy this game as soon as you can. 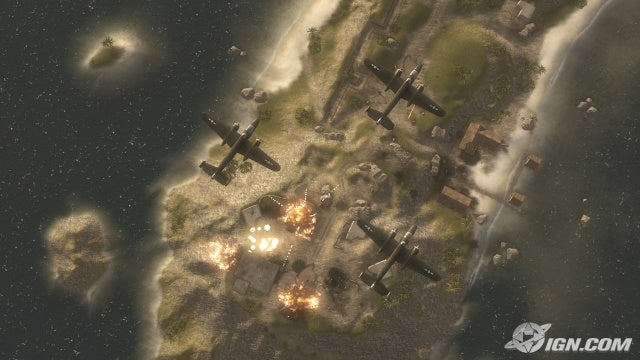 I can't help but feel that DiCE will release DLC for this one somewhere down the line, and even if they don't, this game will last you. The trophies/achievements will come easily with time, as they're more about working as a team, and doing stunts that you would do anyway (jumping out of a plane, parachuting into an enemy base, and ripping them a new one. That's everyones dream in reality), there really ISN'T an excuse to not own this. The only true flaw, is that it's TOO popular. Server's were iffy for a couple days, but they've added more, and will continue to. If you have to, wait a week, then buy it. Whatever you do, make sure to pick this one up somewhere down the line, because as for WW2 shooters; this is as good as they get.
#Community
Login to vote this up!